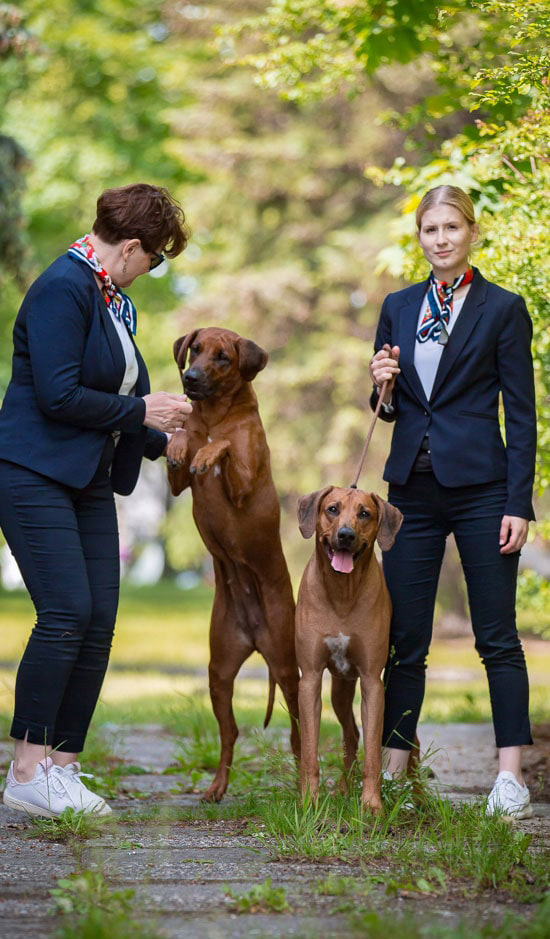 To love is to understand – this phrase is applicable not only to humans. Rhodesian Ridgebacks are not simply peculiar-looking dogs with ridges on their backs – they have their own dog personalities, often very dominant and notably seductive. In order to become an owner of such hound, you must learn the history, the achievements and the challenges of this breed.

Its history can be predated to the legendary Hottentot hunting dog. No one knows if it actually existed – there’s just a few engravings and reports acknowledging the creature’s extraordinary ugliness, but also its bravery, agility and devotion to its owner.

The name of the breed is tied in with its geographical roots – the British colony in Africa: Rhodesia (today’s Zimbabwe) – and relates to the ridge on their backs. This feature is not present in any European dogs; it is, however, quite common amongst their African relatives.

The first settlers from Europe (the Portuguese and the Dutch) arrived in the vicinity of modern-day Cape Town circa 1652 and brought dogs with them. Not all of them could survive in the harsh, African conditions, however, the ones that did make it through were cross-bred with the local “ridged” Hottentot hunting dogs. Cornelius Van Rooyen is considered to be the founding father of the breed; it all started when he bought two black-grey females from his missionary friend – Charles Daniel Helm. According to African sources, the entire breed started with these two dogs: Powder and Lorna. Besides the Hottentot hunting dog, Van Rooyen’s breeding plan included several other breeds like: Greyhounds, Bulldogs, Pointers, Irish Terriers, Airedale Terriers, Collies and Deerhounds. He had one goal on his mind: to breed a brave, agile and resilient hunting dog. Van Rooyen’s granddaughter mentioned that grandpa’s dogs were ridged and not ridged. As a breeder as well as a hunter he cared less for the looks, focusing on their performance instead. Most of the dogs, however, did feature the distinctive ridged back which led to them becoming the beauty standard of modern-day Ridgebacks. Van Rooyen’s hounds soon gained fame among the locals as the perfect hunting companions.

The name “Ridgeback” instead of the “Van Rooyen Dog” or “Lion Dog” was first used in 1910. The initial breed standard (it mostly mentioned the height and weight-related data) was issued in 1920 since a Lion Dog was signed up for a show. Only when the South African Kennel Union began to register them (the first ones were Grootedam Gwen and Grootedam Leo) they were officially renamed to Rhodesian Ridgebacks, which led to even more pedigree dogs being registered.

Two types of Rhodesians were distinguished back then: the bigger and bulkier northerners, and the lighter southerners

The final breed standard (based on the Dalmatian one) was developed by Francis Richard Barnes of the ESKDALE kennel.

The modern Rhodesian is not a loner prowling the bush anymore – it is a hunting dog. Back in Africa, he was also used to protect households, farms, farm animals and, most importantly, pioneer families traversing the Dark Continent. This is why they are rather bound to and focused on their territory as well as their owner. They should not be raised as guard dogs since defensiveness is in their blood. A Ridgeback that is defending is not aggressive but rather constantly vigilant, reacting only when the owner is endangered. American breeders described the first dogs they brought home from Africa as “rough”. They were viewed as intrinsically bound to their original owner, and even though the nature of today’s Ridgebacks has been much softened by European and overseas breeders, you still need to keep in mind that they are not some big teddy bears. This is a breed of strong and proud hunting dogs, united with their human families, and ready to defend them no matter what. Ridgebacks are brave and smart, meaning they are also independent. They cannot be harnessed through brutal and dominating training, however, to obtain a loyal, obedient and faithful companion is to have it trained in a responsible way, by an experienced trainer. Being violent or forcing them is not the way to go here. Ridgebacks enjoy close company of their humans whether sitting, lying on their feet or putting their heads on the owner’s lap.

This is the very reason they will not like guarding the garden by themselves and will not take of themselves; they require your company and attention. A Ridgeback’s best friend, besides a man, is another Ridgeback. If you have seen this breed play once, you will know what we mean. They bare their teeth, growl, roll on their backs, cheerfully run from and jump over each other. It bears a resemblance to muscular wrestlers fighting brutally. Seeing this for the first time can be quite shocking, however, this is not an aggressive show of dominance – this is just friends happily prancing around. Other dogs do not always understand and accept this and are often afraid, which leads to avoiding any contact with the playful redheads. This does not mean that Ridgebacks have to be the sole breed present in one’s home – they get along with packs consisting of not only dogs but cats as well. They can be their loyal friends, prepared to defend them no matter what if such need arises. Rhodesians love open spaces – they can and enjoy running few and more kilometres at a time without breaking a sweat. It is noteworthy that they could go off in a chase after some prey, so it is important to keep them disciplined. They are durable companions during hikes and bike trips; they will help you get in shape for a cross country run or a marathon. They are successful both on track runs as well as coursings. It is considered that they can participate in such competitions once they are over 18 months old.

When writing the above my sources of information were:

These are a great read if you would like to acquaint yourself with the breed.