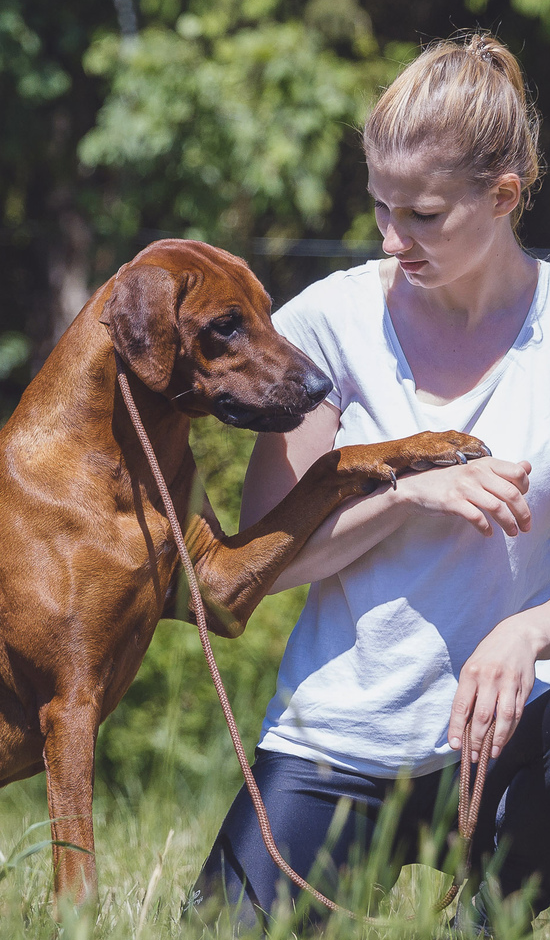 Is Rhodesian a good fit for me?

Can I provide them with suitable conditions?

As mentioned above, Rhodesians are not an off-leash breed, with a strong hunting instinct and big demands when it comes to physical activity.

A Ridgeback owner should be active and enjoy spending their free time outside. Rhodesians can be great running or cycling companions.

NOTE: If you are looking for a guard dog, then a Rhodesian is not for you. They cannot be kept in a kennel outside due to their coats. Ridgebacks are not an aggressive breed but they will step in to defend their owners. They are also wary of strangers

I have small children

No dog breed should be left alone with a child without supervision. There is always the risk of a child pulling a dog’s tail, or sticking a finger in its eye – even the most patient Golden Retriever is not going to put up with that. The hunter nature of the Ridgebacks is brought up yet one more time in Fleim’s book, in the subchapter dedicated to their relations with children: “If a toddler runs across the room shrieking, the average Ridgeback will chase him, even knock him down”. She highlights that this is not due to their aggressiveness but instincts – “[…] and when confronted with sobbing child, the Ridgeback will invariably lick his face and ask what all the fuss is about”.

Nonetheless, most breeders are reluctant to allow their dogs to be brought into families with children younger than 5.

There are other animals in my house

Rhodesians are rather quick and fierce, especially when playing around. It is not uncommon for other breeds to try to avoid them, as they do not quite get their behaviour. We have seen this on our own yard – when Lab playfully tried to charge at Wendelin, he used to defensively lay flat on his stomach.

When exposed to other animals, like cats and rabbits, they manifest their hunter nature easily. Lema has never hurt Fiodor, but she loves to give him a good chase once in a while, no matter the place they are in – it can happen both in the house, as well as outside in the garden.

Each new dog coming into a house where a pack has already been established – no matter the animals that make it up – has to adapt and accept its terms. It goes without saying that this is much easier with pups, especially when they already had some contact with other living things.